Perhaps you, like me, feel a bit of detoxing is in order after six solid weeks of turkey, wine, cheese, cookies, chocolate, ham, ham, ham, more wine, eggnog, more cheese and a splash or two of limoncello. With January now upon us, the party is officially over. It’s time to clean up our act or purchase larger clothes.

I’ve learned years ago to write my New Year’s Resolutions with the savvy of a trial lawyer — vaguely and with plenty of loopholes. For example, “Eat more vegetables.” I can do that! After feeling utterly unsatisfied after today’s lunch of Lean Cuisine spring rolls, I decided to play around a bit with some Brussels sprouts. The maple glaze is courtesy of Weight Watchers, but don’t be alarmed. I’ve still managed to trash it up a bit. Who says eating more vegetables has to be dull and tasteless? 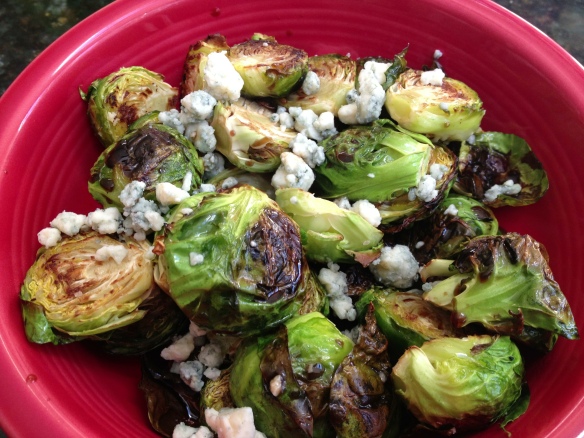 1 to 2 pounds of Brussels sprouts, ends trimmed and halved

Heat oven to 450 degrees. On baking sheet, drizzle Brussels sprouts with olive oil and sprinkle with salt. Toss to coat well. After about 10 minutes in oven, give a good stir and roast another 5 to 10 minutes.

In small saucepan, heat maple syrup and balsamic vinegar over medium heat for about five minutes. Add a pinch of kosher salt and stir well. Drizzle on top of Brussels sprouts, and add Gorgonzola if desired. Trust me, it will be desired.