Today we harvested the first crop of radishes from our garden. I think I was about 30 years old before I could say I liked radishes, so if they’re not your thing right now, maybe they will appeal to you at some point in the future.They are so vibrant and beautiful that every year I find myself photographing them just for fun. But they are not just pretty to look at — radishes are filled with vitamin C, as well a group of compounds called isothiocyanates, which are shown to be effective against some types of cancer cells.

This is a very diet-friendly recipe, but don’t let that put you off! Even if I wasn’t watching my weight, this dressing would appeal to me. And added bonus? It’s from The New York Times.
Radish Salad by Mark Bittman, The New York Times
Ingredients 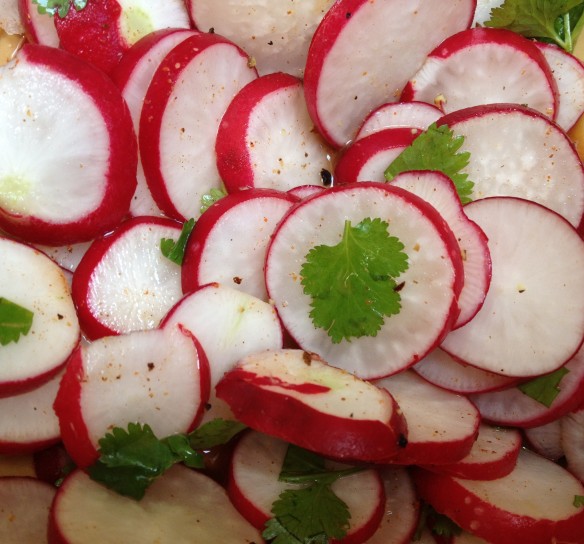 My imaginary best friends at The Bitten Word, Clay and Zach, posted this recipe today, and I knew I had to try it. The selling point to me was the Scotch Bonnet chile pepper; I have socked away many from last year’s crop — probably enough to blow up a small country. These babies are H-O-T hot and need to be handled with extreme care. However, don’t let that scare you. The dish itself really isn’t all that powerfully hot. Spread throughout five cups of black-eyed peas and lots of fresh onions, peppers, tomatoes and cucumbers, the pepper’s heat is diffused down to the level of a pleasant little kick.

I did make a couple of modifications shown in parentheses below. For starters, I could not abide by one whole cup of oil. I realize you serve this with a slotted spoon and all of the oil isn’t consumed, but — competitive dieting or not — I just couldn’t use that much oil. Will I eat six pieces of bacon? Yes. Will I make a recipe using one whole cup of oil? Never. Don’t try to figure me out.

The subject of canola oil is one of hot debate. I considered posting a couple links, but it’s probably better for you to do your own research. Besides, I’m not looking to fight with the powerful canola lobby. I used olive oil because it just felt like the right thing to do. I won’t judge you if you choose to use one whole cup of canola oil, though.

This is a dish from Senegal, which gives it lots of exotic food cred. “Oh, sure, I’ll just bring my Senegalese bean salad to your picnic. It’s fabulous! Senegalese food is my favorite.”

1. In a large bowl, whisk together the lime juice and parsley. While whisking, drizzle in the canola oil to make a smooth dressing.

2. Add the black-eyed peas, scallions, bell pepper, tomato, cucumber, and chile to the dressing. Season the mixture with salt and pepper. Set aside at room temperature for at least 1 hour, or refrigerate up to overnight to marinate and meld the flavors. Serve chilled or at room temperature.

Wondering if any astute readers can catch what’s wrong with this picture? 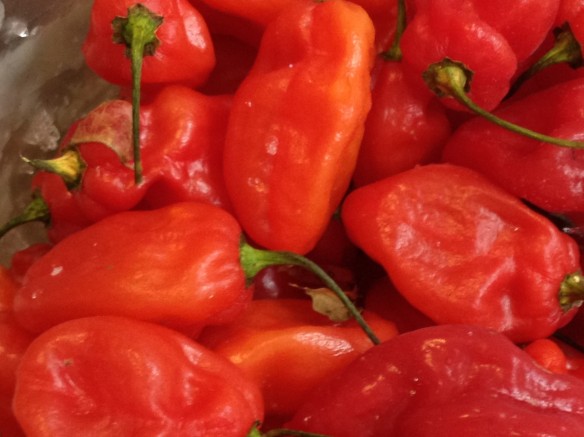 Part of my hot pepper arsenal

This is one of my all-time favorite pasta salads which was introduced to me by one of my favorite hostesses. It’s so simple, healthy, and — dare I say — elegant for a pasta salad. It is also open to improvisation, so feel free to add or subtract vegetables to your liking.

While you can certainly use a store bought basting oil to roast your veggies, I prefer to use my own concoction. Just add one clove of minced garlic and some fresh herbs such as thyme and parsley to about half a cup of olive oil, stir well, and let it sit for about 30 minutes. Plain old olive oil works just fine, too.

asparagus (but I used broccoli rabe because: 1) it’s awesome and 2) no asparagus in the house)

fresh herbs such as basil, parsley and thyme (dried if you’re lame like me)

Mix veggies in olive oil, salt and pepper, and roast at 425 degrees for about 20 minutes or until brown. I like to do the eggplant in one batch and everything else in a second batch. Cool veggies. 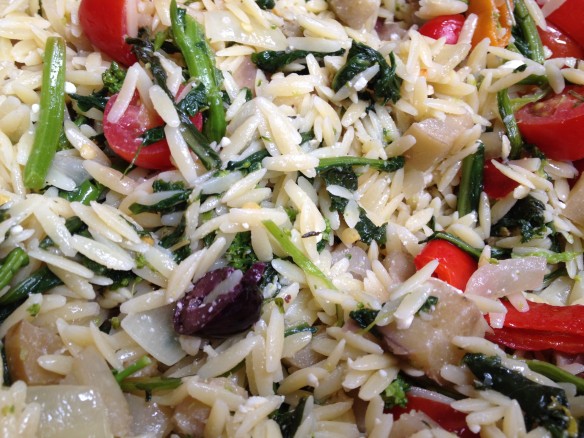 This is a recipe from one of my old Food & Wine cookbooks. It’s perfect to serve for a luncheon, as I did yesterday with my husband’s two beautiful nieces. The ladies insisted it was good enough for this blog (I have such high publishing standards here, you know), so I snapped a quick picture. This salad is the rare combination of light yet substantial: low in fat, high in flavor, and decent nutritional value.

The one thing I might do differently is add a bit more red pepper flakes, or perhaps even some freshly diced hot peppers, assuming my fellow diners liked things hot. I have found it’s worth the effort to shred the cabbage in the food processor rather than just use a bag of cole slaw, but if you’re short on time or lacking a food processor, bagged cole slaw will do just fine. 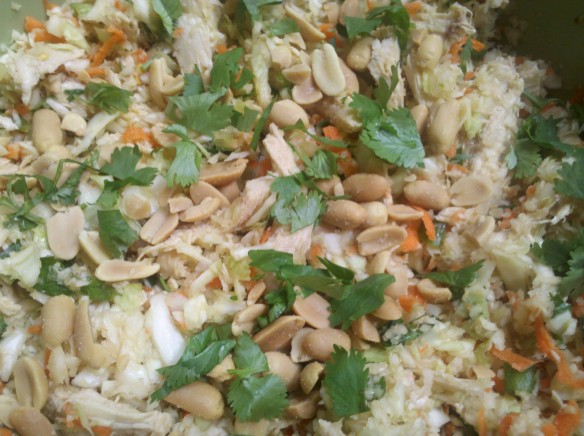 I love quinoa. It’s fun to eat, and it’s fun to say. (And just in case you’re unsure, it’s pronounced KEEN-wah). Quinoa, quinoa, quinoa! Quinoa is one amazing little grain. Technically it’s a chenopod. One important thing to know about quinoa, aside from its deliciousness and versatility, is that it’s very healthy and a complete protein containing all nine essential amino acids. Another important thing to know is that you shouldn’t eat all ten servings of this by yourself, even if you want to. Don’t ask me how I know this.

Wegmans is my grocery store of choice. This recipe first appeared in the Wegmans Winter 2011 Menu magazine, and I’ve been hooked ever since. Not only is it healthy and delicious, it’s also beautiful (or “aesthetically pleasing,” as our friends at Project Runway would say). It is the perfect summer salad and quite the crowd pleaser.

I feel the same way about salad dressing as I do about frosting: Always make your own! It’s super easy and so much healthier. So while you can certainly buy the Wegmans brand lemon vinaigrette, I am also including my own lemon vinaigrette recipe below for you to try.

I met my husband Ed when I was 23, and once things got serious, I had a strong desire to cook for him. Even back then, it was how I expressed my love. I never let lack of skill get in my way. But what to make? I bought my first cookbook when I was 22. It was The New York Times Cookbook, and it made about as much sense as buying Harry Potter for a Kindergartener who just learned how to read: way beyond my novice level, very intimidating and frustrating.

On my lunch break one afternoon, I wandered into the original Urban Outfitters on Walnut Street in Philadelphia where I stumbled upon this book, The Surreal Gourmet: Real Food for Pretend Chefs by Bob Blumer. Pretend chefs? Sign me up! It was the early 90s, Caesar salad was all the rage, and there looked like a decent enough Caesar salad recipe on page 19. I was sold, and my cookbook collection was born. My apron collection was still about ten years away.

This recipe will always hold a special place in my heart, as it was the first decent thing I ever made for my husband, as well as the first recipe anyone ever asked me for. I have made this hundreds of times through the years, and it is always a hit. I don’t usually include anchovies, mainly because I rarely have them on hand, and I use olive oil instead of safflower oil. I never coddle the egg, since I live on the edge. Aside from that, I stick to the recipe, and I’m always happy with the results. As far as my family is concerned, this is the only Caesar salad worth eating.

Coddle the egg yolk by placing the whole unshelled egg in boiling water for 40 seconds, then running under cold water for 15 seconds.

In order and one at a time, add salt, pepper, garlic, anchovies, mustard, egg yolk, lemon juice and Worcestershire to a large wooden salad bowl. After adding each ingredient, beginning with the garlic, use the back of a soup spoon to grind it against the wall of the bowl and blend it with the previous ingredients into a smooth paste. (It should take about 15 seconds of muscle power to blend in each new ingredient.) Add oil and vinegar. Blend well.